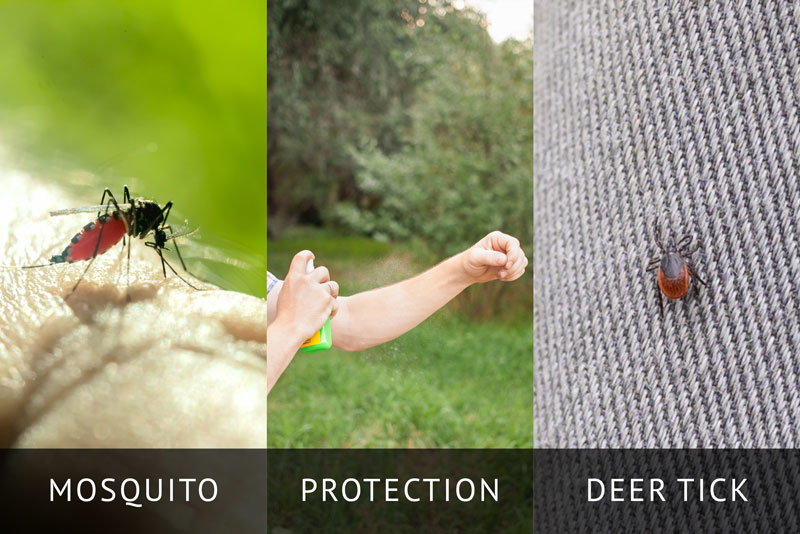 Why mosquitos and ticks are a concern, and how to help protect yourself and your family against the diseases they may carry

What are vectors and vector-borne diseases?

Vectors are living organisms (such as ticks or mosquitos) that can transmit infectious diseases to other living hosts (people or animals.) In the cases of West Nile virus and Lyme disease, the insects contract the diseases from biting an already-infected bird or animal.

Once an insect vector becomes infected, it can pass the disease to another human or animal host through a bite. When a person gets an illness from being bitten by an infected vector, that person has a vector-borne disease.

Some vector-borne diseases will produce few noticeable symptoms in an infected person, and the illness may go undetected. However, the same diseases can also cause significant discomfort and illness, Including life-long disabilities or even death.

The following is basic information on West Nile virus and Lyme disease, both of which are carried by vectors common in Central Illinois.

West Nile virus is the leading cause of mosquito-borne disease in the continental United States. Mosquitoes contract the disease from infected birds, then pass it on to other birds, animals, and humans.

Approximately 80 percent of persons bitten by an infected mosquito have no disease symptoms. The remaining 20% of infected individuals may experience the following:

If you have experienced a mosquito bite and develop any of the above symptoms, you should seek medical attention. While most individuals recover from the West Nile virus without difficulty, those experiencing more severe illness may need medical intervention.

The Centers for Disease Control and Prevention (CDC) recommends reducing the number of mosquitoes around your home and neighborhood to reduce your risk of exposure to West Nile virus and other mosquito-borne illnesses.

Removing or frequently emptying and replacing water reservoirs (birdbaths, buckets, trash containers, etc.) around your house reduces mosquitoes by eliminating the places where they lay their eggs.

The CDC also urges you to take personal precautions to avoid mosquito bites. Use EPA-registered insect repellant containing DEET and apply it when outside to protect vulnerable skin from mosquito bites. This is especially important during the hours of sunrise and sunset when mosquitoes are most active.

Lyme disease is a bacterial disease transmitted by infected deer ticks, also known as black-legged ticks. These ticks usually acquire Lyme disease through bloodmeals from infected deer or small rodents. For humans, the risk of contracting Lyme disease increases if the tick has been attached for 36 hours or more.

It’s worth noting that not all ticks carry Lyme Disease. However, it is prudent to avoid tick bites whenever possible.

Lyme disease signs and symptoms can vary significantly from one person to another. Symptoms also vary with the length of time since the initial infection and may include:

If you experience a rash or unexplained illness accompanied by fever following a tick bite, consult your physician as soon as possible and explain that a tick bit you.

Prevention is always the best way to protect against Lyme disease and other vector-borne illnesses. Whenever possible, avoid tick-infested areas.

However, if you live in or visit wooded areas or areas with tall grass and weeds, greater vigilance may be necessary to keep you and your family safe. Regular mowing and weed trimming will help reduce the tick habitat around the outside of your house and on your property.

Reduce your risk of tick bites when you are outside by using insect repellent on your body and clothes. Examine yourself, your children, and your pets after being in areas of potential tick exposure. If found, remove and dispose of ticks promptly.

The Illinois Department of Public Health (IDPH) monitors the presence of Vector-borne diseases in Illinois to reduce the risk of illness to humans and animals. Throughout Illinois, local health departments support these efforts by:

More information about vector-borne illnesses and prevention is available through the Illinois Department of Public Health (IDPH) or by contacting the Moultrie County Health Department at 217-728-4114.

Hearing Loss: Protect Yourself and Your Family this Summer

May is National Stroke Awareness Month

Adults and the Importance of Immunizations

STD Awareness Week: A Matter of Life and Health

Lead Poisoning: Why Are Children at Greater Risk?

What are the 3 Most Common Toxic Substances in Your House?

Donate a “Soup-er Bowl” of Food!

Info for Adults: Vaccines—Know what you need

Learn the Facts About Flu Vaccine!